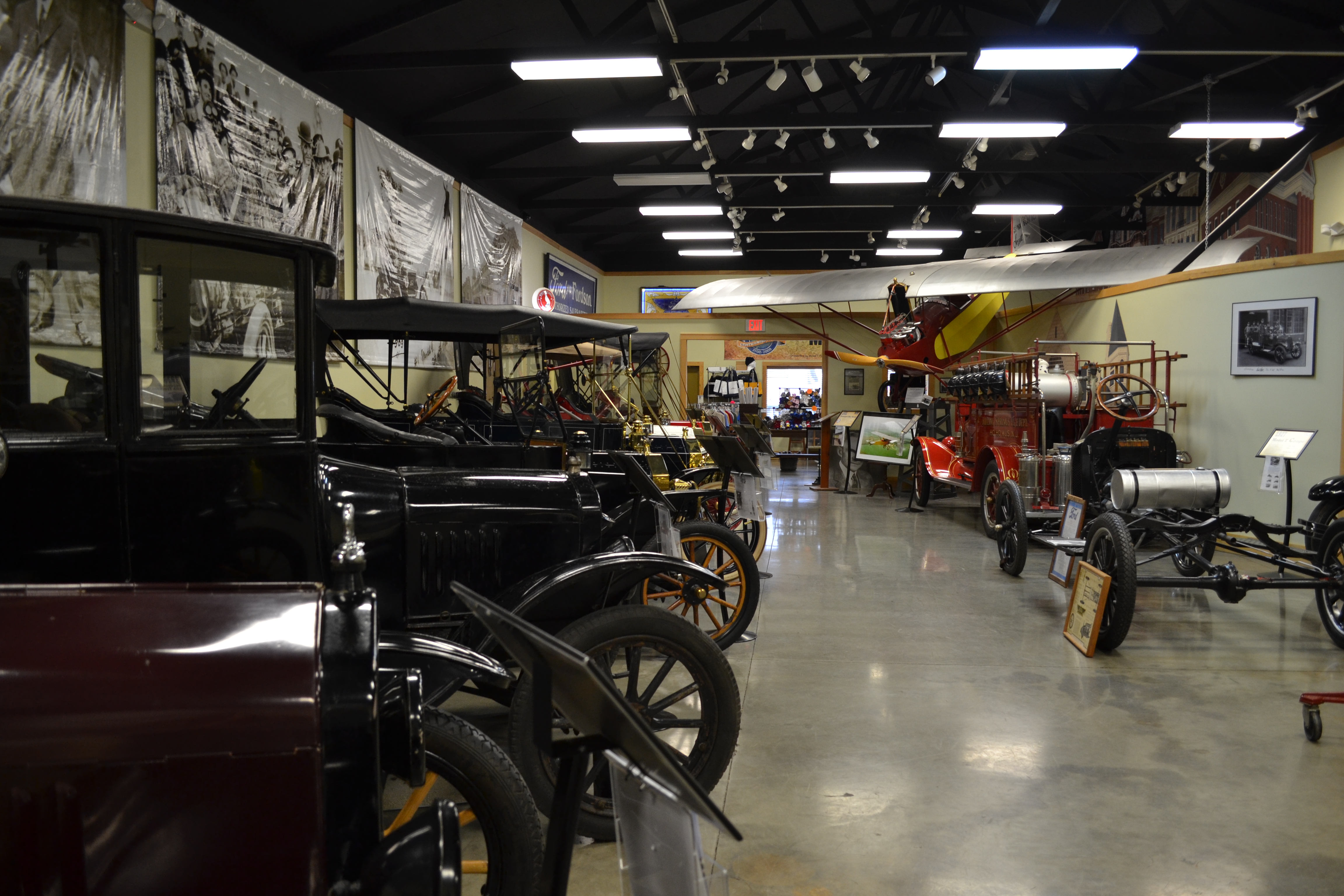 A rather small museum is having a rather big impact on the Wayne County economy.

Two of the cars on display at the Model T Homecoming lined up in front of the Richmond museum. (Photo by Diana Pappin)

Trip Advisor ranks the Model T Museum in Richmond’s Historic Depot District as the county’s top attraction for visitors. “What a great find,” raves PlateMan of Arlington, Va., on the website. “The place is small yet jam-packed.” “Not the biggest place, but a great selection of cars, a fire engine and even an airplane,” agrees Tom H. of Lebanon, Ohio. Chuck S. of Ashville, N.Y., is adamant. “If you’re planning a trip to Richmond, Indiana,” he writes, “you must visit the Model T Museum!!” Why is this museum located in a state whose rich automotive history includes names like Haynes, Stutz Bearcat, Duesenberg, Auburn and McFarlane – but not Ford? In a town where Davis, Pilot, Westcott, Crossley and Richmond cars were manufactured – but not Model Ts?

Susan Yeager, executive director of the Model T Ford Club of America and its museum in Richmond, talks to the Homecoming crowd. The annual event is held in June. (Photo by Diana Pappin)

It’s pretty much a coincidence. For many years, the chief executive officer and business manager of the Model T Ford Club of America, Jay and Barbara Klehfoth, lived in the county. In 2007, the MTFCA opened the museum in its original location next to the Warm Glow Candle retail complex along Interstate 70 near Richmond. So when the Model T turned 100 years in 2008, it made sense to celebrate the car’s birthday here. Susan Yaeger, current executive director of the MTFCA and museum, estimates that 15,000 people and 1,000 of their classic cars visited Wayne County during the week-long Centennial T Party in July 2008, complete with a parade, driving tours and other special events. During the 2008 celebration, Model Ts were everywhere – in restaurant and motel parking lots, driving through the countryside and down city streets, stopped at gas stations for a fill-up. Jerry Kramer, now on the MTFCA’s board of directors, remembers watching a string of the cars drive past his farm as he was working in the fields. “I kept hearing the people laughing,” he said. Kramer became intrigued. He now owns three Model Ts – two of them are on display at the museum – and five other vintage autos. He and his wife, Kim, volunteer regularly at the museum, which moved to the Depot District in 2012. “It’s kind of a draw,” he said modestly. “We get a lot of visitors from all over the world.”

Model T lovers look over the many cars on display at the annual Homecoming event held in June. (Photo by Carl Rasmiller)

That’s because the Model T Ford Club is an international organization. A glance at the museum’s guest book shows addresses in Canada, England, Belgium and as far away as Zambia, Africa. Stateside visitors hail from New York, California, Colorado, Utah, Texas, Louisiana, Oregon and New Hampshire, as well as neighboring states of Ohio, Kentucky, Illinois and Michigan. Yaeger said her records show a 54 percent increase in museum attendance in 2016 over 2015. In 2016, close to 3,500 visitors came to the museum, almost 900 more than the previous year. What difference can numbers like that make? A significant difference, according to Mary Walker, executive director of the Wayne County Convention & Tourism Bureau. The museum, she said, is perfectly situated in its new location, an area that was a Richmond hub when Model Ts were new. The depot and surrounding buildings – and the shops and restaurants in them – appeal to museum visitors. “Everything feeds on each other,” said Walker. “We get (museum visitors) to stay longer than two hours.” Ideally, they find so much to do in the Depot district and beyond that they stay a night or two or plan a return trip. And every visit or extended visit adds up to help the county. The 2015 Economic Impact of Tourism in Wayne County prepared by Rockport Analytics estimates that tourism accounted for $104.3 million during the year – encompassing money spent on food and beverages, shopping, transportation (including gasoline), lodging, entertainment and recreation.

That estimated total is up from $93.4 million in 2014, $90.2 million in 2013, and $84.6 million in 2012. An average of 77 cents out of each dollar stays in the county, Walker said. According to her, having the MTFCA and its museum here is a real advantage, not only to the Depot District but to the county as a whole. “It provides a tangible economic advantage, enhancing Wayne County’s visitor numbers and having a direct economic impact to area businesses while significantly elevating the county’s national and international exposure,” said Walker. “It sets us apart from our competition.” Yaeger takes the museum’s role in county tourism very seriously. “Nobody leaves the museum without getting a map (of nearby attractions) and recommendations about where to eat, shop, and find other interesting places to visit in the area, she said.

Visitors look over a Model T sports car available for sale at this year’s Homecoming.

“They are always sending people over here,” said owner Tammy Ullery of Ullery’s Ice Cream, about a block from the museum. Ullery and her family use a hit and miss engine – a device of about the same technological vintage as the Model T – to make their old-fashioned ice cream. Customers who come over from the museum tell her that Model Ts and ice cream just go together. Ice cream stops are part of driving tours whenever possible, so a walk to Ullery’s shop is a logical next step for many visitors. “We’re honored that they include us in their activities,” said Ullery. Jim Harlan is executive director of the Wayne County Historical Museum about six blocks away. He describes a cooperative relationship between the two museums. “They do a pretty good job of telling people about us,” said Harlan. “It’s a real good match.” Some Model T enthusiasts go straight to the county museum’s collection of Richmond-manufactured cars, Harlan said, but just as many are interested in the museum’s broader collection. Vintage car buffs tend to be fascinated by all aspects of history, he said.

Model T parts and accessories for sale at the Homecoming event. Next year’s Homecoming is expected to draw a large crowd to Richmond and Wayne County. (Photo by Carl Rasmiller)

But there’s no doubt that Model T fans are dedicated first and foremost to America’s first mass produced automobile. Only 300 Model Ts were built in 1908. The big surge began in 1909, and production continued until 1927. It’s estimated that more than 15 million Model Ts were manufactured during that time. The museum’s collection shows development of the Model T over the years and the versatility of how the cars were used. There is a 1909 model. A fire truck. An ambulance. A snowmobile. A dump truck. An airplane built with a Model T engine. The collection keeps growing – so much so that the museum has rented annex space across the street that includes a working garage. The Vintage Garage and Education Center opened June 3 of this year and is expected to draw even more visitors. Brian Andrews of Rossville, Ill., made three or four trips to Richmond to help build the garage, created by volunteers from various Model T clubs working with donated materials. He expressed great satisfaction in how the museum has “grown and matured.”

Odie, foreground, and Lilly relax in the 1924 Model T depot hack belonging to their owners, Rod and Heather Barrett of Anderson. (Photo by Louise Ronald)

Andrews was in town for this summer’s Model T Homecoming, an annual event that brings vendors, collectors, and all variety of enthusiasts to Wayne County. In July 2018, the museum is set to host a national tour. Yaeger expects 150 to 200 Model Ts – and between 300 and 500 drivers and family members – to show up for the week-long event. It won’t reach the scale of the centennial, Yaeger said, but Model Ts will once again be all over the streets of Richmond and Wayne County. Passengers will be laughing, waving and honking at passersby, and spending money on food, lodging, gas, and more – and making an old-fashioned impact on the Wayne County economy.

About the Model T Museum