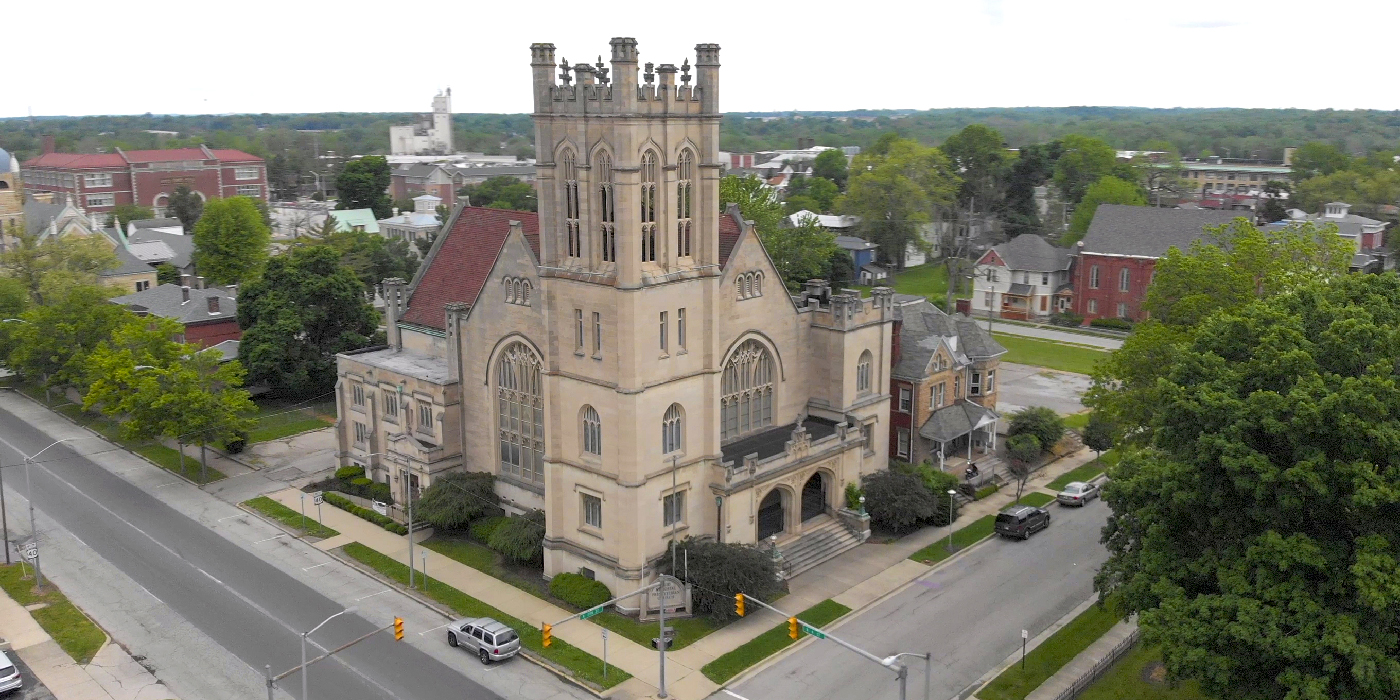 Standing majestically on a corner in Richmond’s historic Starr District is the former Reid Memorial Presbyterian Church. Built in 1906 by local industrialist Daniel G. Reid, a memorial to his parents, Daniel Reid and Anna Gray Reid. It was a marvel at the time, a testament to faith and beauty, history and architecture.

But its future became clouded when the church closed in 2017. Today, however, that future has brightened considerably, thanks to a group of local volunteers who have created a unique partnership to forge a new life for the historic structure.

Their plan, which has grown in enthusiasm and activity, is to reinvent the building as a community and performing arts center, one that will highlight the city’s ongoing efforts to preserve history and build community.

“Keeping it for the benefit of the community is really what motivated us,” said Ray Ontko, a local businessman who led the volunteer effort. “We looked at different options but in the end decided its highest and best use is to use it for civic, artistic and religious purposes.”

Their work began when they forged a partnership with Indiana Landmarks, and worked with the Whitewater Presbytery, the controlling organization for Indiana Presbyterian Churches, to secure ownership and find a use for the church building.

Research revealed that if the building no longer housed a church for a period of 10 years its ownership would revert to Daniel Reid’s heirs. With the help of Indiana Landmarks they negotiated a deal with the heirs to accept a payment to give up their interests in the building.

And amazing it is. The church boasts a stone Scottish gothic tower with Tiffany windows throughout, a vaulted ceiling, a historic Hooks & Hastings organ and one of the few known Starr concert grand pianos, all still intact.

“It’s extraordinary based on the amount of Tiffany studio glass in the building,” said Marsh Davis, president of Indiana Landmarks. “That in itself makes it of state and national significance.”

In the days ahead, Indiana Landmarks will be moving its Eastern Indiana office into the building.

“We are convinced that the building is now in good hands and great leadership has emerged to steer the future of the place,” Davis said. “We see the potential there and the need and we want to be part of that success.”

After its closing, the building landed on Indiana Landmarks’ list of 10 most endangered historic buildings. But today it is home to the Reid Memorial Presbyterian Church and Community Center, now known as The Reid Center.

It is fast becoming a living, thriving community center, hosting concerts and performances, weddings, the occasional church service, assemblies, a celebration of Christmas and a meeting place for community groups.

A partnership has been formed with Indiana University East for a faculty recital and Earlham College for a jazz concert. And volunteers are working on lining up an impressive list of spring events.

It was designed as a majestic space for religious services but also for intimate performances.

“It’s got perfect acoustics. From the beginning it was designed as a performance venue,” said  Sue King, archivist at Morrisson-Reeves Library in Richmond, who is on the committee to preserve the structure. “Daniel Reid was a participant in many important community construction projects in his lifetime, but this was his personal project. He paid for everything down to the china.

“The building has an important place in our history and the history of our state and even the nation,” she said.

Lynn Knight joined the local effort because of the group’s commitment to “diversity, equity and inclusion.”

“Richmond is a very diverse community and bringing people together in one space to celebrate that is something I’m very passionate about,” said Knight, who was director of events and operations at Earlham College for 30 years. “This has been a grassroots effort from the start and the growth and development of this community has been a grass roots effort.

“This is going to be a space for everybody,” she said.

Fund-raising has begun for air conditioning and a number of other improvements, including repairing the steeple’s bells, which stopped ringing when the church closed.

“It is an absolutely amazing resource for our community, one that we really shouldn’t let go,” Ontko said. “And we are beginning to see considerable community support for trying to preserve it. People recognize its value as a unique venue, a beautiful place and a place that can and will bring people together.”

The Reid Center will be hosting a fundraising concert on November 11th featuring Richmond native, world-class drummer and Jazz musician, Jeff Hamilton, and the Trio. Find details and purchase tickets here. Tickets are also available at the Wayne Convention & Tourism Bureau located at 5701 National Road East, Richmond IN 47374 or by phone at 800-828-8414 and at tickets.reidcenter.org.

Desmond Bane Comes Back to Give Back