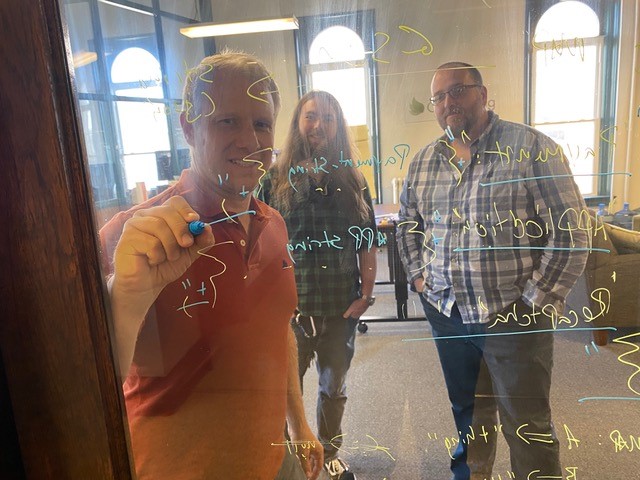 He built the family with dedication and devotion. He built his business with grit, guile and gumption. He has never regretted making Wayne County his home.

“We are just Midwestern people. We love to travel but this is home,” Eastman said. "When we travel and when you land you breathe that air; you’ve got the fields of corn and soybeans, the rolling hills and woods.

“That just feels right,” he said.

Eric, a 1996 Earlham grad, is a software developer and entrepreneur. He and a partner, George Knecht, created Green Filing, an innovative provider of electronic court filing and related litigation services. The start-up is a complement to the court-to-client technology business of Doxpop, a Richmond company. Eastman first completed an internship in 1994 with Ray Ontko, Doxpop’s co-founder, which started a 20-year professional relationship concluding when Green Filing and Doxpop resolved overlapping ownership in 2014. They remain close friends.

"We are just Midwestern people. We love to travel but this is home."

Eastman and his partner started Green Filing in 2009. They struggled mightily in writing computer code, getting certifications and building a customer base. They were innovators, determined to build on the niche they discovered.

Eventually, they took their company national, responding to a growing trend of eFiling in county courts. They created a foothold in Utah then branched out to Texas, Indiana, California, then Illinois.

“Los Angeles County is significantly larger in population than the whole state of Indiana. When we established that relationship our business exploded,” Eastman said. “That really took us from a thriving small company to being highly profitable and made us a target for acquisition.”

But the journey was never easy or fast. Following the startup, Eastman earned about $1,500 in the first two years working from his basement.

By 2012, the company had built a reputation as a dependable supplier of eFiling legal services.

"I will be looking at ways to create some opportunities, giving back to the community, to downtown Richmond and to Wayne County. I'm happy we stayed here and are doing business here."

Following its startup, Green Filing was based at downtown’s Innovation Center (now Main Street Richmond) while Knecht worked from his home in Scottsdale, Az. The company soon outgrew its Innovation Center home so Eastman found and renovated a second floor downtown space, adding several software developers. Today, the company has 11 employees and plans to add two or three more workers in the months ahead.

With the InfoTrack acquisition, Eastman will serve as chief technology officer for Green Filing for the next two years. During that time he will plot and plan his next move which he hopes to  include helping local entrepreneurs grow their own local businesses and improving downtown Richmond.

“I will be looking at ways to create some opportunities, giving back to the community, to downtown Richmond and to Wayne County,” Eastman said. “I’m happy we stayed here and are doing business here.

“One of our challenges has been that we’ve hired a number of developers and they haven’t stayed in Richmond,” he said. “One of my motivations now is to create a space so we can keep and retain employees here.”

Whatever the future holds for Eastman, Wayne County will remain his home.

“This is a great place to raise a family,” he said.

Away from work, Eastman and son Alex have discovered pickleball on courts in Clear Creek Park.

“It’s so fun and it’s a game you can pick up in a half hour. Since (the city parks department) put in new courts interest has exploded. That’s a great example of the parks becoming a center for community that creates relationships and creates a sense of belonging.”