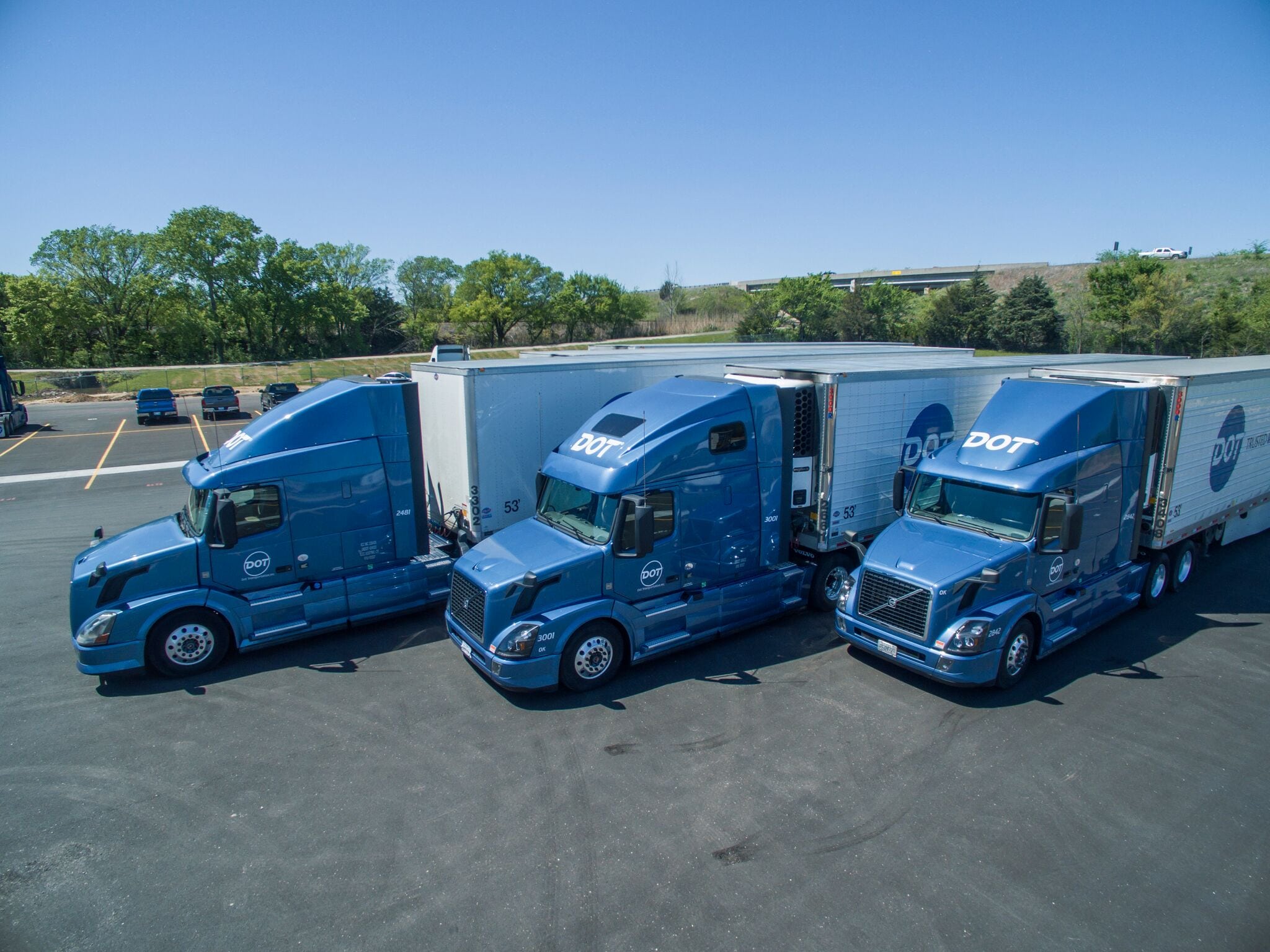 In anticipation of their soon-to-be-launched CDL+Plus program, Ron Oler, Site Director at Ivy Tech Community College – Connersville job shadowed a DOT Foods/Transportation Truck Driver Trainer during a typical early morning shift. The following is an account of his experience.

I had the opportunity to ride along with a DOT Foods/Transportation Driver Trainer for a day on July 25, 2018. We were delivering 38,628 pounds of food and related items from DOT’s Cambridge City, IN distribution center (DC) to a customer in Cincinnati, OH. It was the longest 170-mile round trip I have ever taken.

I left my home in Richmond, IN at 12:16 a.m. and drove 21 miles to DOT’s distribution center (DC) outside Cambridge City, IN at Interstate 70 and State Road 1. Pulling up to the gatehouse after a very dark, foggy commute, I was greeted by a bright-eyed, energetic young man who very pleasantly asked me to sign in, then directed me to the dispatch/receiving office on the far side of the property. I parked my car by the office and was buzzed in by another enthusiastic young man who also didn’t seem to mind working the wee hours of the night.

I waited in the breakroom as planned for my driver trainer to arrive and check in with dispatch. He arrived and we sat down to review his load, destination, and separation plans upon arrival. His trailer had been loaded hours beforehand into three sections (frozen, refrigerated, and chilled). We had 38,628 pounds of freight on 41 pallets stacked in 24 positions inside the 53-foot Utility trailer. Upon arrival, we expected to be unloaded by the company’s fork lift driver, then we would be tasked to separate 144 different items onto separate pallets, and would have a four-hour window to do so on their refrigerated loading docks, outside their freezer warehouse. I had packed warm clothes and was glad I did later in the day.

We walked out to his “Lauderdale Blue” Volvo VNL 760 (# IN 3172) with sleeper cab, 12-speed automatic transmission, and new to DOT air-ride passenger seat (happy me). His tractor was built in November, 2017 and began service at DOT in December. Because he is a trainer driver, it had only 39,000 miles on the odometer – still new. At 1:37 a.m. he programmed his GPS (mostly for time announcements as he knew the route very well) and pulled around to locate his trailer (#2427).

Backing up to the 5th wheel, he lowered the truck’s air bags to reduce damage to the Teflon-insert. After we heard the positive clank of the latch engaging, he shut down the truck for pre-ride inspections and hookups. While performing the pre-ride checks, he verified the trailer’s outside number, then matched the load number on the manifest with a card on the front of the trailer and another inside the rear doors. He also noted the refrigerator’s fuel tank was at 50% so we stopped and refilled it before pulling up to the scales. After he verified our weight (safety and highway rules for axle weights) with the manifest, we pulled up to the gate. The watchman verified our truck number, trailer number, load number both on the manifest, and cards on the front and inside the rear doors, then we were off at 2 a.m.

Driving along the interstate and state roads was uneventful under the almost full moon, and the ride was very comfortable. We arrived at the customer’s location at 3:40 a.m. in Cincinnati, OH and were glad to have avoided all the early morning rush-hour traffic. After checking in with their transportation clerk, we were directed to Dock 10 to drop our trailer in between two box trucks. Backing up a 53 foot trailer connected to a sleeper-cab truck on their narrow lot was problematic, but my experienced driver trainer made it look easy and we were docked by 4:05 a.m. Later in the day I got to watch a rookie driver take 20 minutes to complete the same maneuver.

Donning a warm jacket and gloves, we were buzzed-in to their chilled dock area to find our trailer already bereft of four pallets – our assigned fork lift operator was wasting no time. We spent the next four hours scanning barcodes on wrapped pallets, then breaking them down and scanning 144 different types of freight. We had only one broken pallet when their fork lift driver unloaded our truck. And of course it was a stack of 140, 20 lb boxes of cheese that we got to move by hand to a new pallet.

By 8:57 a.m. I was back in the truck ready for a nap and a snack. We had spent almost five hours separating our freight and waiting on their clerk to scan and check in almost 20 tons of product. We had one broken bag, one crushed box, and four boxes of shredded cheese that was supposed to be four cases of dark vanilla syrup (evidently their product codes are one number apart and whoever loaded the trailer had misread the label (an easy mistake). This was declared to have been a good haul with only one broken pallet, two damaged packages, and four incorrect packages.

At 9:33 a.m. we had finally completed the paperwork, reconnected our trailer, and were pulling out of the customer’s lot. We were delayed by other trucks including an armored car and a passenger van that had pulled into the wrong lot. After 90 minutes on the road, we stopped in Eaton, OH for lunch and a much deserved break. We took the usual driver’s one-hour rest break before pulling out to Interstate 70 and heading back to DOT’s Cambridge City distribution center.

When we pulled up to the gate at 12:45 p.m., the energetic young man’s shift had ended and we were greeted by an equally pleasant woman who checked our numbers and documented our return. After we found a suitable empty space to drop our trailer (a spotter would be out shortly to gather our returned products), we went inside the office to meet some day shift office workers and for my driver trainer to check his mailbox for any new paperwork. The Peoplenet computer in the truck keeps him connected to the DC at all times and sends him messages about upcoming training sessions, and reminders about when to take breaks; and how much longer he would be on the clock in the 14-hour maximum workday.

By 1:24 p.m. I was driving home after a very interesting, educational, informative, long day in the life of a daily OTR truck driver. But it was a very safe journey with my driver-trainer in a very comfortable Volvo truck.

If you are interested in a new career as a truck driver, contact me at the location below. We will soon launch a credit-based CDL+Plus program at our Connersville site within our Supply Chain Management/Logistics academic program.