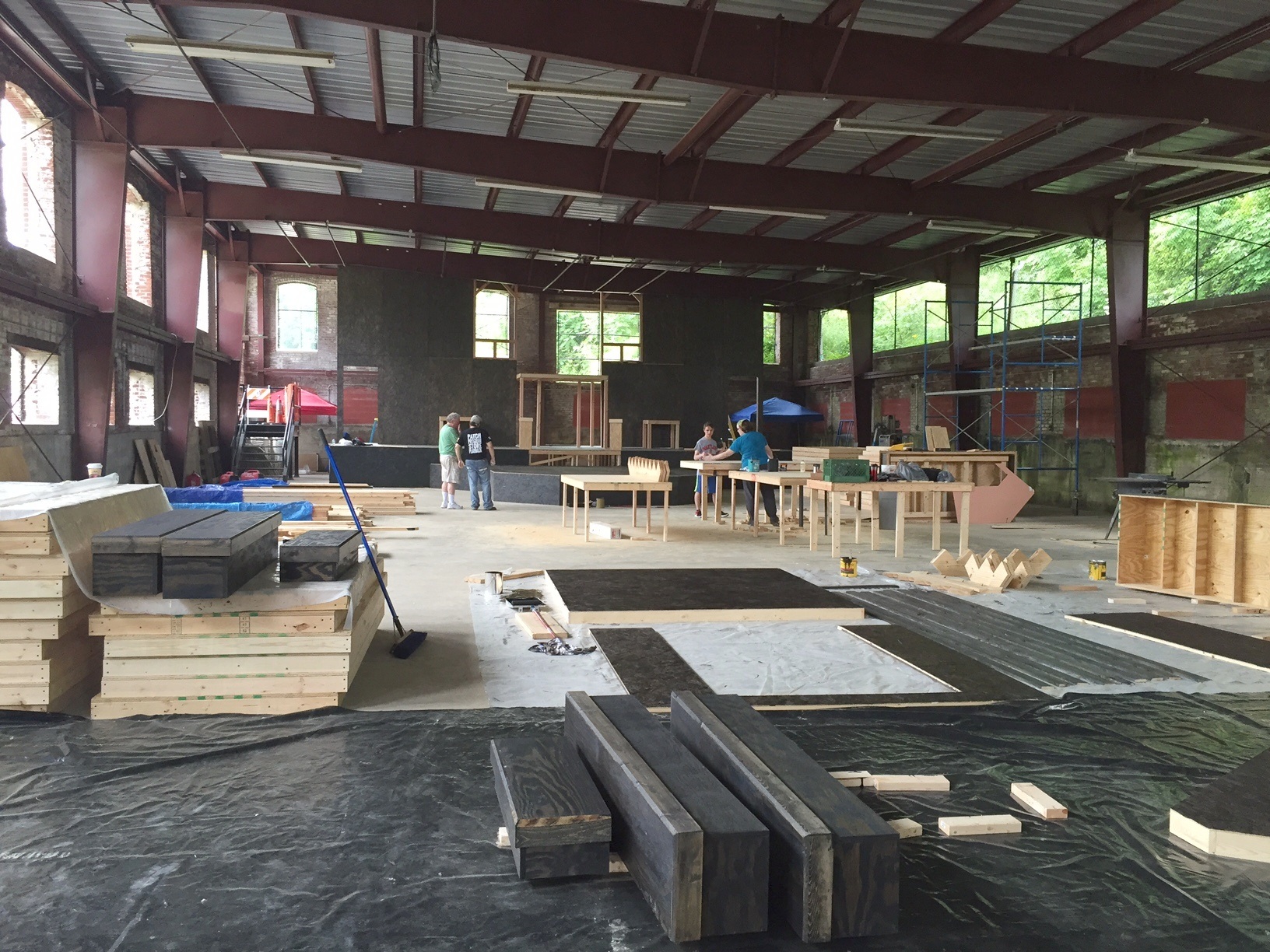 A man who died 400 years ago is breathing new life – maybe a lot of it – into Richmond and Wayne County.

William Shakespeare is the man. The new life comes from the Richmond Shakespeare Festival, now in its third year. The festival began on June 9th and wraps up on June 26th. “I think this place in a few years could very well be a destination Shakespeare location,” said Darek Riley, an actor from Las Vegas, Nev. Such a thing has happened before. In 1952, Stratford, Ontario, faced a major economic crisis as its biggest industry moved out. A small group of people took a cue from the town’s namesake – Stratford, England, home of the Royal Shakespeare Company – to start a theatrical festival dedicated to the bard’s work. Now that festival lasts all summer long. Hundreds of thousands of people attend annually. Speaking before the Canadian parliament in February 2015, former House of Commons member Gary Schellenberger described the festival as a “dynamic economic force. It provides 3,000 people with full-time jobs. It attracts visitors from around the world, and the valuable tourist dollars brought into the region provide strength and prosperity to the retail, dining, and hospitality industries. In total, the Stratford Festival generates approximately $140 million in economic activity each year.”

Stratford has a population of about 33,000. Richmond businessman Ray Ontko was familiar with the Stratford story, so when a June 2013 local benefit performance of “The Tempest” drew a significant audience, Ontko was inspired to help build a festival here. “I could tell that we could pull it off,” he said. The Richmond Shakespeare Festival was incorporated in December 2013. Six months later, 800 people came to its first season. The 2015 season saw that number grow to more than 950. And there’s potential for plenty more. Richmond’s easy access for audiences from Indianapolis, Dayton and Cincinnati is an obvious asset for growth. Organizers estimate that approximately 5 percent of last year’s theatre-goers came from this wider region. This year, they are making a concerted effort to advertise the festival in those cities. And there’s room to handle bigger audiences.

Colin Sapienza avoids a blow from Jeremie Korta during fight practice for the Richmond Shakespeare Festival production of “The Tragedy of King Lear” as Darek Riley, (back right) looks on. Riley, an actor from Las Vegas, Nevada, is a fight instructor.

Home to the festival is the former Starr-Gennett building in the Whitewater Gorge Park. The long-vacant site offers some protection from the weather with walls and a roof, but the sense of being out-of-doors remains, making the festival unique among regional Shakespeare performances. The festival moved to Earlham College facilities last year as improvements were being made to the Starr-Gennett property, but returns to the gorge this summer – with the addition of onsite parking and restrooms. Festival organizers will continue to work with Richmond Parks and Recreation to spruce up the site. Should the festival outgrow the space in the future, Ontko said, there’s plenty of theatre space right in the city center – at Richmond High School, Richmond Civic Theatre, and Earlham College. He even sees the former Tivoli theatre as a possible venue. “If there’s enough demand, we could do something with that building,” said Ontko. There are reasons to believe the festival might grow that big. Taking the helm of this year is producing artistic director Patrick Flick, an Oxford, Ohio, resident who also serves as executive director of the international Shakespeare Theatre Association. Under Flick’s leadership, the festival is bringing a member of the Actors’ Equity union to Richmond to play the title role in “King Lear.” “This puts us on the map among professional actors,” Ontko said. It also creates the potential of the festival becoming a participant in the Actors’ Equity candidacy program. Actors hoping to join the union can earn qualifying points by performing at participating sites.

Erika Pearson is fitted for the Richmond Shakespeare Festival production of “The Comedy of Errors” by costume designer Melanie Mortimore as costume coordinator Cate Hudson looks on.

As the talent pool grows, so does the audience. Flick has expanded on a program begun last year to attract young actors from theatre programs at Ball State, Miami, and other universities – who bring with them family, friends and fans. Annie Evans just finished a bachelor’s degree at Ball State and is spending the summer as a festival intern, both acting and helping build the stage and sets. She’s enthusiastic about the opportunity to learn from professionals, seasoned amateur performers, and her fellow interns. And she’s having a good time in Richmond. “It’s a very welcoming community,” Evans said. “This is a great place for a Shakespeare festival. … This can grow to be something extraordinary.”   BREAKOUT For information about the Richmond Shakespeare Festival, go to www.richmondshakes.org. Productions for 2016 are “The Tragedy of King Lear” and “The Comedy of Errors.” Performances are from June 9-26. Tickets can be ordered through the website. Ticket sales cover approximately one-third of festival costs. Donations are welcome.
Hill’s Pet Nutrition ‘amazing’ as Vaile partner
Purdue is positively thriving in Richmond